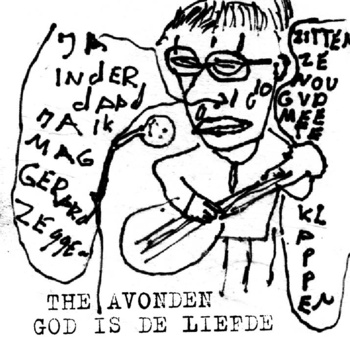 Posted at 11:08h in Uncategorized by Smikkelbaard 0 Comments
0 Likes

Ah Gerard Reve, if only you’d lived to see this ode to you. Now I like Reve for one thing (despite the fact that there are a number of reasons why liking Reve could be, ahem, problematic) and that is his tale of Eendje Kwak; especially the cartoon version from the 1980s* . In this story, a duck covers a boring Dutch village (populated unsurprisingly enough, by other, more righteous ducks) in his own shit. Motherfucker, how I love this; as long as Eendje Kwak is about the lunatics will take over the asylum. Spilt Milkman and Hospital Bomber Marc van der Holst also digs Reve; going so far as to call his new band The Avonden (the title of Reve’s first and most famous work). With this release, he rounds up his old bandmates and mates to make a very, very stripped down set of campfire tunes set round Reve’s prose.

Now listening to this is going to be a bitch if you’re English and don’t know any Dutch or any Reve, as the prospect of listening to someone mumble through a load of Dutch prose over a country take on the Velvet Underground may not appeal. I dig that. I’m not sure how successfully van der Holst has been able to abridge Reve’s prose into a musical format, either. It’s impossible to tell from here. Regardless of my (lack of) thoughts on how well Reve’s prose has been treated, sometimes things are a bit too whimsical musically; there’s no doubt that Reve’s famous pugnacity is conspicuous by its absence, given van der Holst’s laconic and often whispery style of singing. Other puzzles are trying to work out a link between Reeve & Beatles heartthrob, Stuart Sutcliffe, who is immortalised in song on this record. But something shines through God is Liefde on repeated listen; it’s a bit like listening to some strange domestic soundtrack, and songs like Nieuw Paaslied (New Song for Easter) or Droomgezicht come on like Lou Reed reciting his shopping list in the room next to you. It’s really charming, and through the semi-acoustic fug, something very chirpy and intelligent shines through. Prijs God also features guitar by the Mighty Corno Zwetsloot, so what’s not to like really? Watch out for this bugger coming out. It might turn round to bite you in the arse.