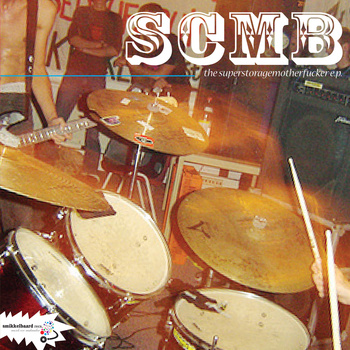 Posted at 11:37h in releases by Smikkelbaard 0 Comments
0 Likes

“Like Orpheus kicking his lyre into a skip, like Odin giving a plate load of vegan sausages to Fenrisúlfr and like Gertie Wilders going for a blue rinse at his favourite Surinaamse hairdresser, this release is an unholy proposition, and a long time coming. A Shitrocksampler of head-shaking proportions, the new record from Leiden’s long maligned, often misunderstood but always Heroic Sugar Coated Mindbombs is finally here after years of lethargic toil, basement flooding, homebrew and backache. The superstoragemotherfucker ep shakes leaves off trees like no other with its elemental noise and attitude. Sounding like a poetry group meeting its end in a car crusher. Recommended to those who realise that modern life’s far too serious to take seriously. Deserved to be heard by all.”

Appearing out of the mists like a Sherman tank draped in the soiled undergarments of grateful Hollanders, this metal Goliath can be heard (via download) on “5 Mei”. Freedom!